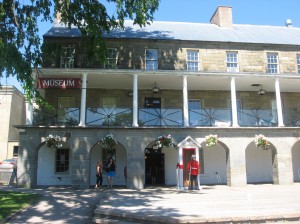 The Fredericton Region Museum is a gateway into the exciting history and diverse heritage of central New Brunswick. The areas of York and Sunbury counties have served as meeting places for Aboriginals, Loyalists, Acadians, and various other settlers for centuries.

With over 4,000 square feet of exhibit space, a dozen galleries, hundreds of objects on display, and exhibits changing every year, the museum is a fun and exciting way to look into our past.

The Fredericton Region Museum is the home of the famous Coleman Frog, the world’s largest frog! He is the 42 pound wonder that lived in Killarney Lake, just north of Fredericton, over 100 years ago. The Museum is also home to one of the oldest known artefacts in New Brunswick, a Clovis Point!

The Fredericton Region Museum (formerly the York Sunbury Museum) was founded in 1934 by the York-Sunbury Historical Society, Ltd. The Society was formed in 1932 and now has members from all over North America, however, most are from central New Brunswick. In 1959, the Museum found permanent headquarters in the Officers’ Quarters (571 Queen Street) in the heart of downtown Fredericton.

The Society and Museum remain a non-profit enterprise with a small paid staff and numerous volunteers, who do a wonderful job displaying our history. They work tirelessly to create informative exhibits based on the history of Fredericton and surrounding areas, organize programs and events as well as publish a local history periodical, “The Officers’ Quarters”.